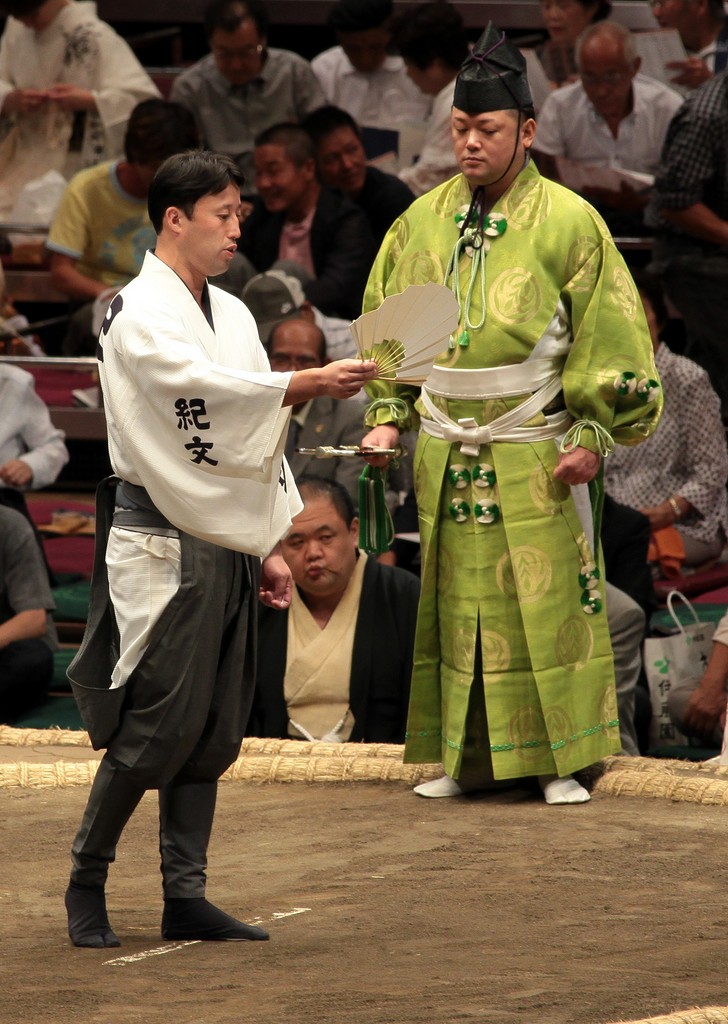 The yobidashi (呼出 or 呼び出し, announcer or beckoner) calls a professional sumo wrestler, or rikishi, to the dohyō (wrestling ring) immediately prior to his bout. He does this by calling the name of each wrestler fighting in turn in a drawn-out, singsong style of voice whilst holding a traditional folding fan. The outfit worn by the yobidashi is loosely based on an old style Japanese workman's outfit, with leggings and split-toed tabi-like boots. In keeping with their workman outfits the yobidashi are actually the Japan Sumo Association's handymen, or odd-job men, and have a wide variety of tasks. These include on match days: sweeping the ring, providing purification salt, displaying banners showing that a match has been decided by default (usually due to a competitor's withdrawal), declared a draw, or subject to a rematch after the next two bouts, and ensuring that, during a bout, no wrestler injures himself on the bucket of chikara-mizu (power water) situated at one corner of the ring. They also can be seen displaying the advertising banners of companies who sponsor particular match-ups between popular wrestlers. They also are responsible for playing drums outside the arena (traditionally to attract customers) on match days. The yobidashi also build the clay wrestling ring (or dohyō) for tournaments and display competitions, and rings for the training stables. There is also a tradition of the yobidashi writing songs, called jinku, based on sumo life. Like gyōji (A Gyōji (行司) is a referee in professional sumo wrestling in Japan), yobidashi typically enter the sumo world as teenagers and work up a career ladder roughly based on the ranking system for wrestlers, as described until their retirement at 65. The current ranking system was created in July 1993 and consists of nine rank. Most of these ranks clearly follow those for the rikishi, or wrestlers, with the exception of the tate and fuku-tate ranks, which stand for chief and deputy chief, respectively. This system is identical to that applied for gyoji. Prior to July 1993, yobidashi were simply ranked first-class, second-class, etc. Promotion through these ranks is based primarily on experience, although ability is also taken into account, particularly in promotions to the top ranks. Yobidashi take a single name as their ring name, unlike both the wrestlers (rikishi) and gyōji who have both a surname and given name. This may be related to the practice of the Edo Period in Japan whereby only samurai class persons could hold a surname. The wrestlers (involved in a martial activity) and gyōji (who were lettered) could be construed as having positions consistent with a samurai status, whilst the yobidashi did not. As from July 1993 the upper ranked yobidashi also had their names included on the banzuke, the ranking sheet produced prior to each honbasho. Apart from a brief period previously, only the gyoji had traditionally been included on the banzuke in addition to the wrestlers and their training stablemasters, or oyakata, again indicating the difference in status of the two jobs.