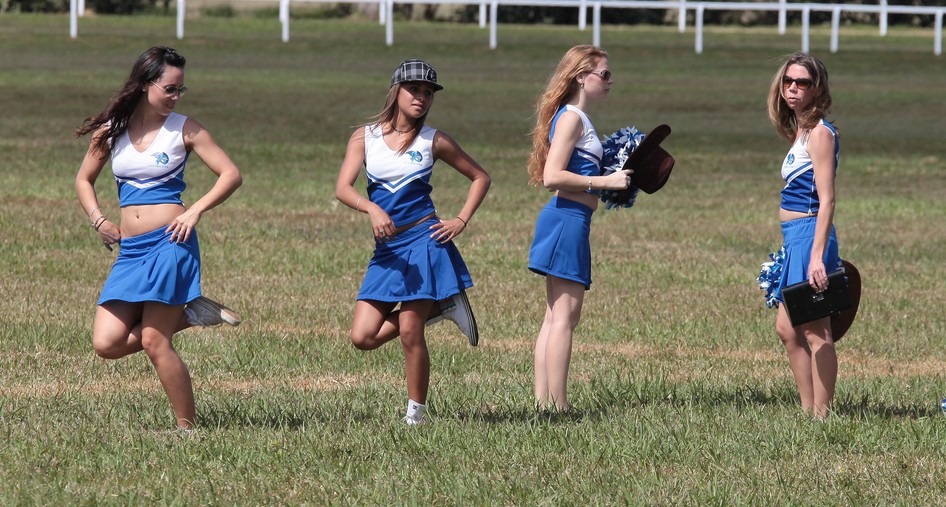 Cheerleading is a physical activity, sometimes a competitive sport, based on organized routines, usually ranging from one to three minutes, which contain the components of tumbling, dance, jumps, cheers, and stunting to direct spectators of events to cheer on sports teams at games or to participate in competitions. The athlete involved is called a cheerleader. Cheerleading originated in the United States, and remains a predominantly American activity, with an estimated 1.5 million participants in all-star cheerleading. The growing presentation of cheerleading as a sport to a global audience has been led by the 1997 start of broadcasts of cheerleading competition by ESPN International and the worldwide release of the 2000 film Bring it On. Due in part to this recent exposure, there are now an estimated 100,000 participants scattered around the rest of the world in countries including Australia, Canada, China, Colombia, Finland, France, Germany, Japan, the Netherlands, New Zealand and the United Kingdom.

History
Organized cheerleading started as an all-male activity. As early as 1877, Princeton University was known to have a "Princeton Cheer", documented in the February 22, 1877, March 12, 1880, and November 4, 1881, issues of the Daily Princetonian. This cheer was yelled from the stands by students at games, as well as by the baseball and football athletes themselves. The cheer, "Hurrah! Hurrah! Hurrah! Tiger! S-s-s-t! Boom! A-h-h-h!" remains in use with slight modifications even today and is now referred to as the "Locomotive". Princeton class of 1882 graduate Thomas Peebles moved to Minnesota in 1884, and transplanted the idea of organized crowds cheering at football games to the University of Minnesota. The term "Cheer Leader" had been used as early as 1897, with Princeton's football officials having named three students as Cheer Leaders: Thomas, Easton and Guerin from Princeton's classes of 1898, 1898 and 1899, respectively, on October 26, 1897; these students would cheer for the team also at football practices, and special cheering sections were designated in the stands for the games themselves for both the home and visiting teams. However, it was not until 1898 that University of Minnesota student Johnny Campbell directed a crowd in cheering "Rah, Rah, Rah! Ski-u-mah, Hoo-Rah! Hoo-Rah! Varsity! Varsity! Varsity, Minn-e-So-Tah!", making Campbell the very first cheerleader and November 2, 1898 the official birth date of organized cheerleading. Soon after, the University of Minnesota organized a "yell leader" squad of six male students, who still use Campbell's original cheer. In 1903 the first cheerleading fraternity, Gamma Sigma, was founded. Women joined cheerleading prior to 1907 and began to dominate the sport during World War II, when few men were involved in organized sports. At that time, there were no collegiate sports for women but women were allowed to participate in cheering squads. Gymnastics, tumbling, and megaphones were incorporated into popular cheers, and are still used. Estimates show that 97% of modern cheerleading participants overall are female. However, at the collegiate level cheerleading is a co-ed sport with 50% of participants being male. In 1948, Lawrence "Herkie" Herkimer, of Dallas, Texas, a former cheerleader at Southern Methodist University, formed the National Cheerleaders Association (NCA) as a way to hold cheerleading clinics. In 1949, The NCA held its first clinic in Huntsville, Texas, with 52 girls in attendance. Herkimer contributed many firsts to the sport: the founding of the Cheerleader & Danz Team cheerleading uniform supply company, inventing the herkie (where one leg is bent towards the ground and the other is out to the side as high as it will stretch in the toe-touch position), and creating the "Spirit Stick". By the 1960s, college cheerleaders began hosting workshops across the nation, teaching fundamental cheer skills to high-school-age girls. In 1965, Fred Gastoff invented the vinyl pom-pon, which was introduced into competitions by the International Cheerleading Foundation (now the World Cheerleading Association or WCA). Organized cheerleading competitions began to pop up with the first ranking of the "Top Ten College Cheerleading Squads" and "Cheerleader All America" awards given out by the International Cheerleading Foundation in 1967. In 1978, America was introduced to competitive cheerleading by the first broadcast of Collegiate Cheerleading Championships on CBS. In the 1960s National Football League (NFL) teams began to organize professional cheerleading teams. The Dallas Cowboys Cheerleaders soon gained the spotlight with their revealing outfits and sophisticated dance moves, which debuted in the 1972–1973 season, but were first seen widely in Super Bowl X (1976). This caused the image of cheerleaders to permanently change, with many other NFL teams emulating them. Most of the professional teams' cheerleading squads would more accurately be described as dance teams by contemporary standards; as they rarely, if ever, actively encourage crowd noise or perform modern cheerleading moves. The 1980s saw the onset of modern cheerleading with more difficult stunt sequences and gymnastics being incorporated into routines. All-star teams started to pop up, and with them the creation of the United States All-Star Federation (USASF). ESPN first broadcast the National High School Cheerleading Competition nationwide in 1983. Cheerleading organizations such as the American Association of Cheerleading Coaches and Advisors (AACCA), founded in 1987, started applying universal safety standards to decrease the number of injuries and prevent dangerous stunts, pyramids and tumbling passes from being included in routines. In 2003, the National Council for Spirit Safety and Education (NCSSE) was formed to offer safety training for youth, school, all star and college coaches. The NCAA requires college cheer coaches to successfully complete a nationally recognized safety-training program. The NCSSE or AACCA certification programs are both recognized by the NCAA. Even with its athletic and competitive development, cheerleading at the school level has retained its ties to the spirit leading traditions started back in the 1890s. Cheerleaders are seen as ambassadors for their schools, and leaders among the student body. At the college level, cheerleaders are often invited to help at university fundraisers. Cheerleading is currently most closely associated with American football and basketball. Sports such as association football (soccer), ice hockey, volleyball, baseball, and wrestling sometimes sponsor cheerleading squads. The ICC Twenty20 Cricket World Cup in South Africa in 2007 was the first international cricket event to have cheerleaders. The Florida Marlins were the first Major League Baseball team to have cheerleaders. Debuting in 2003, the "Marlin Mermaids" gained national exposure and have influenced other MLB teams to develop their own cheer/dance squads.