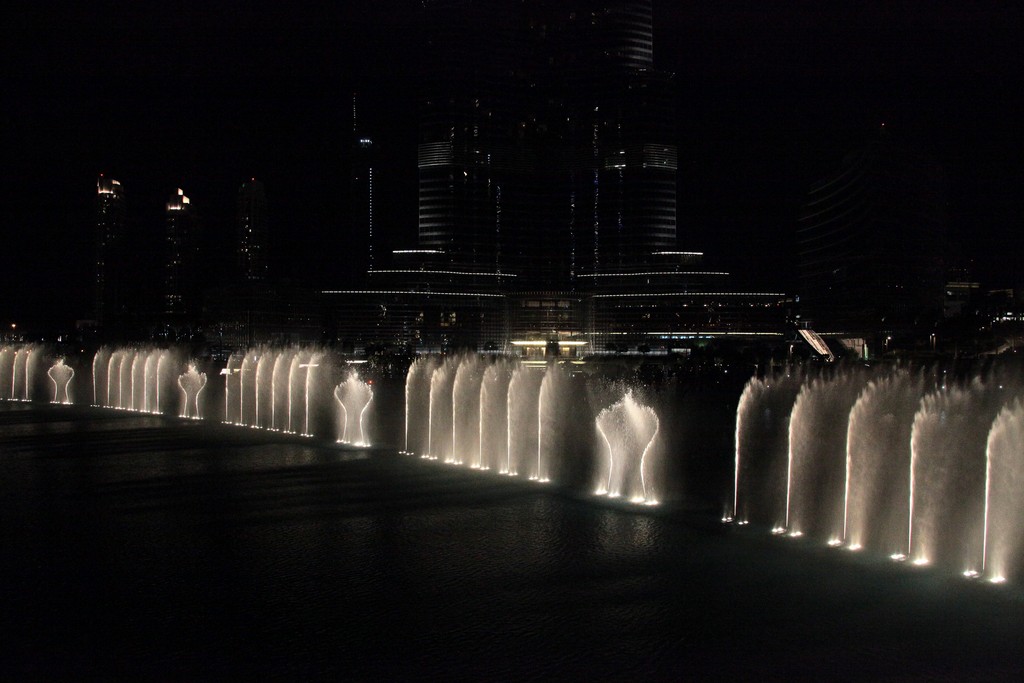 The Dubai Fountain is a record-setting choreographed fountain system set on the 30-acre manmade Burj Khalifa Lake, at the center of the Downtown Dubai development in Dubai, United Arab Emirates.
It was designed by WET Design, the California-based company responsible for the fountains at the Bellagio Hotel Lake in Las Vegas. Illuminated by 6,600 lights and 25 colored projectors, it is 275 m (902 ft) long and shoots water 150 m (490 ft) into the air (equivalent to a 50-story building), accompanied by a range of classical to contemporary Arabic and world music. It was built at a cost of AED 800 million (USD 218 million). The name of the fountain was chosen after a contest organized by the developer Emaar Properties, the result of which was announced on 26 October 2008. Testing of the fountain began in February 2009, and the fountain was officially inaugurated on 8 May 2009 along with the official opening ceremony of the Dubai Mall. On 2 January 2010 the height of Dubai fountains was increased to 275 m (902.2 ft). DHL Express has highlighted its "most ambitious advertising campaign to date" at The Dubai Fountain. The global logistics company premiered an eye-catching light show in Downtown Dubai on 20th October 2011, which was choreographed in dramatic style to a specially reworked version of the Motown classic "Ain't No Mountain High Enough". The song is also the anthemic soundtrack to DHL's new campaign, now airing across the Middle East region.The special display will run every Thursday, Friday and Saturday evening for a month.

The Dubai Fountain can spray 22,000 gallons (83,000 liters) of water in the air at any moment. More than 6,600 lights and 25 colour projectors have been installed. During the end of 2010 the fountain had got a new element, fire, which outlined the fountains (the fire was temporary for the 2011 New Years celebration). The Dubai Fountains project water in the air in many different combinations and patterns. The beam of light from the fountain can be seen from over 20 miles away.
The Dubai Fountain consists of many high-pressure water jets and shooters: oarsmen or water robots, which can make the water seem to dance, shooters, which shoot water upwards; super shooters, which shoot water under more pressure up to 240 feet in the air, and extreme shooters, which shoot water under the most pressure to 420 feet in the air. These shooters create a loud "boom" noise after water is ejected. The super shooters and extreme shooters are used the least during each show because it takes a lot of time to build up enough pressure and energy to shoot water that high in the air. After the opening ceremony, extreme shooters has been closed. Nowadays, the extreme shooters still do not perform in the show.