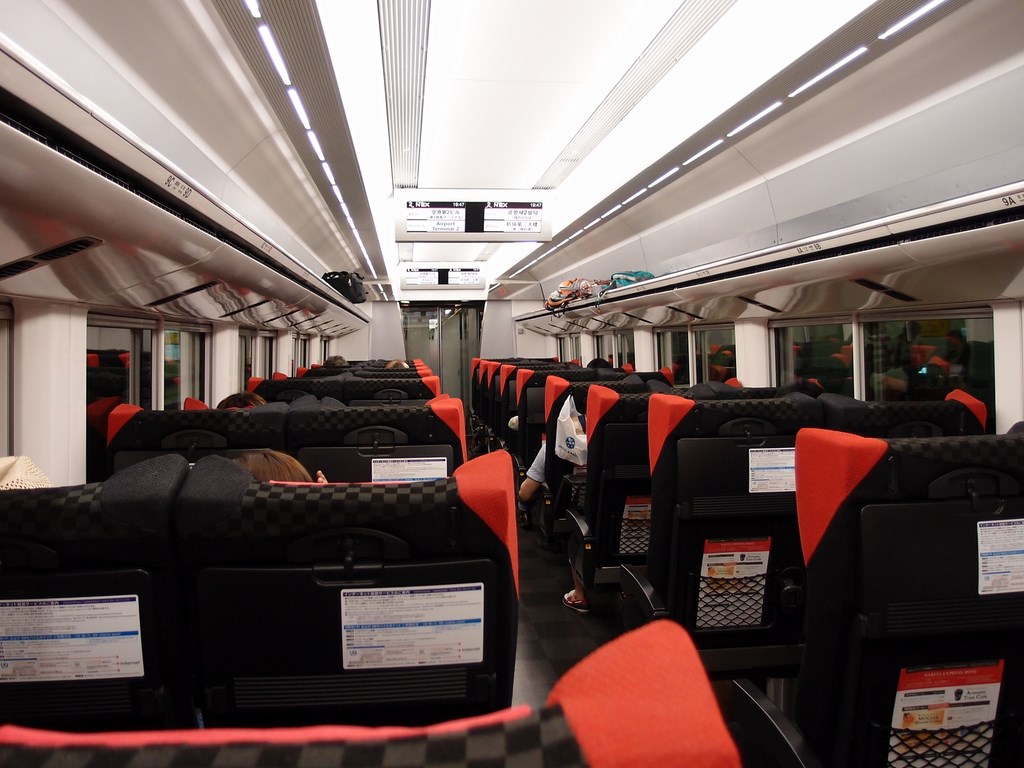 Narita Express (成田エクスプレス Narita ekusupuresu), abbreviated as N'EX, is a limited express train service operated in Japan since 1991 by East Japan Railway Company (JR East), serving Narita International Airport from various Greater Tokyo Area stations.
Services are approximately half-hourly in the mornings and evenings, and hourly through the middle of the day. The main competition for the Narita Express is Keisei Electric Railway's Skyliner. Narita Express trains serve various stations in the Greater Tokyo metropolitan area. Trains are formed of dedicated E259 series 6-car EMU sets, with all trains passing through Tokyo Station, where services are coupled or uncoupled. Usually, a train from Ōfuna or Yokohama will be coupled with a train from Shinjuku, Ikebukuro or Ōmiya to form one train set for the remainder of the journey to Narita Airport (via the Sōbu Main Line and Narita Line). On the return journey, the reverse is true. The majority of Narita Express services do not stop between Tokyo and Airport Terminal 2 Station. In the morning and evening rush hours, however, the Narita Express serves as a commuter express, stopping at Chiba, Yotsukaidō and Narita. The average time between Tokyo and Narita Airport is between 55 minutes and an hour. All seats are reserved, with both Standard and Green (first class) accommodation available.

History
Until 1991, rail service to Narita Airport was limited to the Keisei Skyliner, which at the time used a station separated from the terminal complex. JR had initially planned to run a high-speed line, the Narita Shinkansen, to a station underneath the main airport terminal. This plan was abandoned in the 1980s, and the space originally slated for the underground station and Shinkansen tracks was used to connect both the JR Narita Line and Keisei Main Line directly to the terminal. The Narita Express began service to the new station on 19 March 1991, and Skyliner switched its service to the new station at the same time.

From the start of the revised timetable on 13 March 2010, Narita Express service frequencies were increased with more splitting and combining of trains at Tokyo Station. Service is provided between Narita Airport and Tokyo, Shinjuku and Yokohama every 30 minutes during most of the day. All trains operating to/from Shinjuku now stop at Shibuya, and all trains to/from Yokohama now stop at the new Musashi-Kosugi Station.

Narita Express services were suspended from 11 March 2011 due to the Great East Japan Earthquake and subsequent power supply shortage in the Tokyo area. They were partially restored from 4 April 2011.