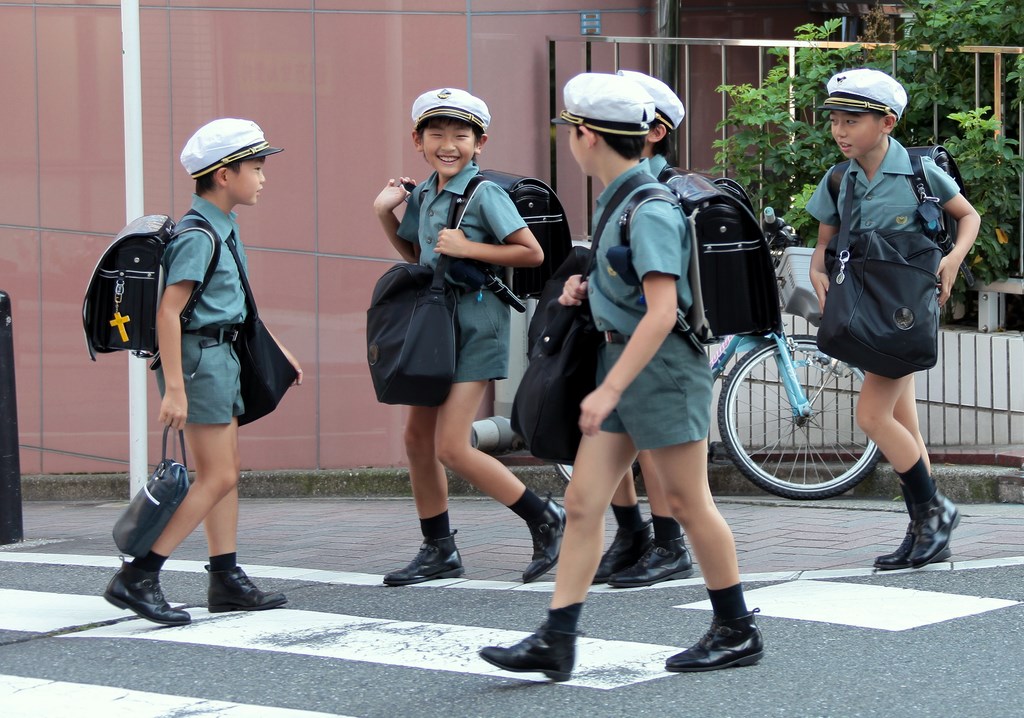 History
The gakuran and sailor-style dress have always been a part of Japan's "growing modern" culture due to it appearing formal and has existed as a concept. An official from Tombow Co., a manufacturer of the sailor fuku (sailor outfits), said that the Japanese took the idea from scaled down sailor suits worn by children of royal European families. The official said "In Japan, they were probably seen as adorable Western-style children’s outfits, rather than navy gear." Sailor suits were adopted in Japan for girls because the uniforms were easy to sew. Old-fashioned textbooks state that the uniforms were based on the Japanese Army uniform rather than the said stated of the European. The sides of the uniform had similarity to existing styles of Japanese dressmaking, and the collar had straight lines. Many home economics classes in Japan up until the 1950s gave sewing sailor outfits as assignments. Girls sewed sailor outfits for younger children in their communities.
In the 1980s sukeban gangs began modifying uniforms by making skirts longer and shortening the tops, and so schools began switching to blazer style uniforms to try to combat the effect. As of 2012, 50% of Japanese junior high schools and 20% of senior high schools use sailor suit uniforms.
The Asahi Shimbun stated in 2012 that "The sailor suit is changing from adorable and cute, a look that 'appeals to the boys,' to a uniform that 'girls like to wear for themselves.'" As of that year, contemporary sailor suits have front closures with zippers or snaps and more constructed bodices. The Asahi Shimbun stated that "[t]he form is snug to enhance the figure—the small collar helps the head look smaller, for better balance".

Sailor fuku
The sailor fuku is a common style of uniform worn by female middle school students, traditionally by high school students, and occasionally, elementary school students. It was introduced as a school uniform in 1920 in Heian Jogakuin (平安女学院) and 1921 by the principal of Fukuoka Jo Gakuin University), Elizabeth Lee. It was modeled after the uniform used by the British Royal Navy at the time, which Lee had experienced as an exchange student in the United Kingdom. Much like the male uniform, the gakuran, the sailor outfits bears a similarity to various military styled naval uniforms. The uniform generally consists of a blouse attached with a sailor-style collar and a pleated skirt. There are seasonal variations for summer and winter: sleeve length and fabric are adjusted accordingly. A ribbon is tied in the front and laced through a loop attached to the blouse. Several variations on the ribbon include neckties, bolo ties, neckerchiefs, and bows. Common colors are navy blue, white, grey, light green and black. Shoes, socks, and other accessories are sometimes included as part of the uniform. These socks are typically navy or white. The shoes are typically brown or black penny loafers. Although not part of the prescribed uniform, alternate forms of legwear (such as loose socks, knee-length stockings, or similar) are also commonly matched by more fashionable girls with their sailor outfits. The sailor uniform today is generally associated solely with junior high schools, since a majority of (though by no means all) high schools have changed to more Western-style plaid skirts or blazers.

Gakuran
The gakuran (学ラン) or the tsume-eri (詰襟) are the uniforms for many middle school and high school boys in Japan. The color is normally black, but some schools use navy blue. The top has a standing collar buttoning down from top-to-bottom. Buttons are usually decorated with the school emblem to show respect to the school. Pants are straight leg and a black or dark-colored belt is worn with them. Boys usually wear penny loafers or sneakers with this uniform. Some schools may require the students to wear collar-pins representing the school and/or class rank. The second button from the top of a male's uniform is often given away to a female he is in love with, and is considered a way of confession. The second button is the one closest to the heart and is said to contain the emotions from all three years attendance at the school. This practice was apparently made popular by a scene in a novel by Taijun Takeda. Traditionally, the gakuran is also worn along with a matching (usually black) student cap, although this custom is less common in modern times. The gakuran is derived from French Army uniforms. The term is a combination of gaku (学) meaning "study" or "student", and ran (らん or 蘭) meaning the Netherlands or, historically in Japan, the West in general; thus, gakuran translates as "Western student (uniform)". Such clothing was also worn by school children in South Korea and pre-1949 China.