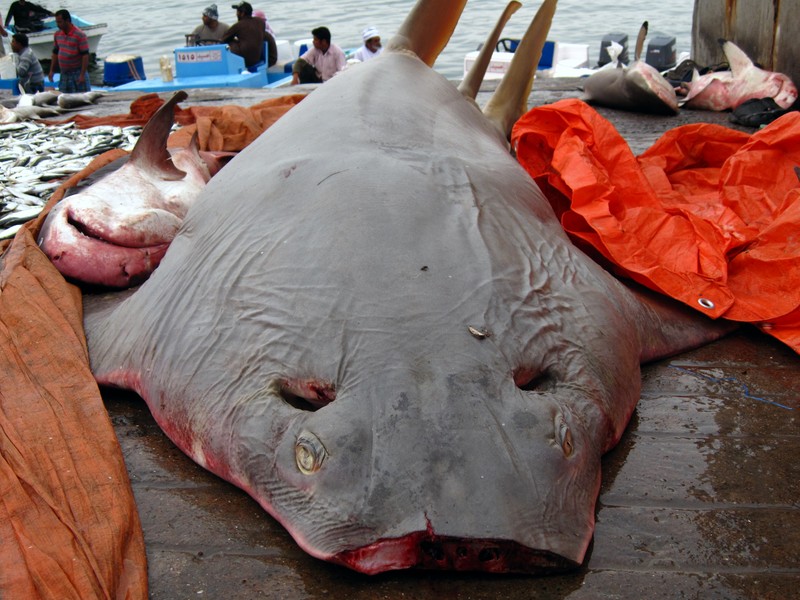 Description
Green Sawfish have a shark-like body, a flattened head and an elongated snout or rostrum, which is studded with 24–28 pairs of unevenly-spaced rostral teeth. This tooth-studded rostrum is commonly described as the 'saw'. The first dorsal fin origin is slightly behind the pelvic fin origin and the lower lobe of the caudal fin is much shorter than half the length of the upper lobe. Green Sawfish are greenish brown or olive in colour on their upper surfaces and pale to white on their undersides. Mature adult Green Sawfish can grow to 5 m in length.

Habitat
The Green Sawfish inhabits muddy bottom habitats and enters estuaries. It has been recorded in inshore marine waters, estuaries, river mouths, embankments and along sandy and muddy beaches. Stead (1963) reported that this species was frequently found in shallow water. Its habitat is heavily fished and often subject to pollution, habitat loss and degradation from coastal, riverine and catchment developments. Green Sawfish have been recorded in very shallow water (<1 m) to offshore trawl grounds in over 70 m of water (Stevens et al. 2005). Smaller specimens (<2.5 m in length) are more common in foreshore and offshore coastal waters (Thorburn et al. 2004), as well as estuaries and river mouths at slightly reduced salinities, but do not venture into freshwater. Larger individuals (>2.5 m in length) are found in both inshore and offshore waters. Their apparent preference for shallow inshore waters as nursery areas increases the likelihood of interaction with inshore gillnets. During surveying for the Status of Freshwater and Estuarine Elasmobranchs in Northern Australia (Thorburn et al. 2004) three Green Sawfish were captured. Two were encountered over sand, while the other over fine silt. All sites at which the species was present were subject to tidal influence with high flow, and captures occurred in waters of 1.2–3 m depth. All three sites had sparse coverings of detritus and snags. Water chemistry at the sites where the Green Sawfish were encountered ranged from 34.2–35.1 ppt. Information on the short term habitat usage of a 3.5 m female Green Sawfish tracked in Port Musgrave, Queensland was obtained by Peverell and Pillans (2004). Over 27 hours, the sawfish moved 28.7 km at an average speed of 28.4 m/min and was at all times within 200 m of the shoreline in very shallow water. Average water depth was 0.69 m. During the day, the sawfish was in slightly deeper water (0.84 m) compared to the night (0.48 m) indicating a diurnal shift in water depth. The preference for shallow water shown by the sawfish in this study and the fact that it moved parallel to the shoreline suggests they may occupy a relatively small area of available habitat that is concentrated in a narrow strip of water adjacent to the shoreline. In Queensland, the Green Sawfish has been found in the same areas as Freshwater Sawfish and Speartooth Shark (Glyphis glyphis) within Port Musgrave. In the Gulf of Carpentaria, the Green Sawfish has been recorded in the same areas as Freshwater Sawfish. It has been recorded in the Van Diemen Gulf area with Freshwater Sawfish, Speartooth Shark and Northern River Shark (Glyphis garricki). Within Joseph Bonaparte Gulf, it has been recorded with the Northern River Shark and the Freshwater Sawfish.

Life Cycle
While limited data is available on the life history of Green Sawfish, it is likely that they are long-lived, produce few pups and mature late in life. The Green Sawfish appears to reach 95% of its maximum length (508 cm) at approximately 24 years of age and size at maturity (from direct observation) in 9 years. Based on these estimates of age, generation length is likely to be about 16 years. The low fecundity and late maturation of Green Sawfish render the species highly susceptible to anthropogenic mortality and limits the ability of the species to recover from threats such as overfishing. Sawfish return seasonally to inshore coastal waters adjacent to the northern Australian region to breed and pup. The Commonwealth Scientific Industrial Research Organisation and Fisheries agencies in Western Australia, Northern Territory and Queensland have recorded pupping in January.This very scant dataset suggests pupping may occur during the wet season. Little is known about reproduction in Green Sawfish. As in other pristids, the reproductive mode is aplacental viviparity with lecithotropic nutrition of the embryos (energy reserves come from the egg). Pristids have some of the largest ova sizes in the Chondrichthyes. Litter size in other pristids is up to 20. At birth, the rostrum is well developed but soft and flexible, and covered by a firm membranous sheath to protect the mother from injury. Grant (1978) suggested that adult males of this species use their saws during mating battles, evident from the scars and gashes on the saws of collected specimens. The sex ratio of male to female is 1:1. A male, captured as a juvenile, survived 35 years in captivity.

Feeding
Sawfishes generally feed on shoaling fish such as mullet, which are stunned by sideswipes of the snout. Molluscs and small crustaceans are swept out of the sand and mud by the saw. In addition the Green Sawfish actively pursue schools of baitfish and prawns. One Green Sawfish, captured in a prawn trawl targeting Banana Prawns (Penaeus merguiensis) in Joseph Bonaparte Gulf, had a Banana Prawn and two 8 cm Leiognathus bindus in its stomach. Peverell and Pillans (2004) observed a 3.5 m female Green Sawfish slashing its rostrum from side to side in shallow water. Herrings (Nematalosa come) and Anchovy (Thryssa hamiltonii) were observed jumping out of the water during these episodes, presumably to escape from the sawfish. Sharks (superorder Selachimorpha) are a type of fish with a full cartilaginous skeleton and a highly streamlined body. The earliest known sharks date from more than 420 million years ago. Since that time, sharks have diversified into 440 species, ranging in size from the small dwarf lanternshark, Etmopterus perryi, a deep sea species of only 17 centimetres (6.7 in) in length, to the whale shark, Rhincodon typus, the largest fish, which reaches approximately 12 metres (39 ft 4 in) and which feeds only on plankton, squid, and small fish by filter feeding. Sharks are found in all seas and are common down to depths of 2,000 metres (6,600 ft). They generally do not live in freshwater, with a few exceptions such as the bull shark and the river shark which can live both in seawater and freshwater. They breathe through five to seven gill slits. Sharks have a covering of dermal denticles that protects their skin from damage and parasites, and improves their fluid dynamics so the shark can move faster. They have several sets of replaceable teeth. Well-known species such as the great white shark, tiger shark, blue shark, mako shark, and the hammerhead are apex predators, at the top of the underwater food chain. Their extraordinary skills as predators fascinate and frighten humans, even as their survival is under serious threat from fishing and other human activities.