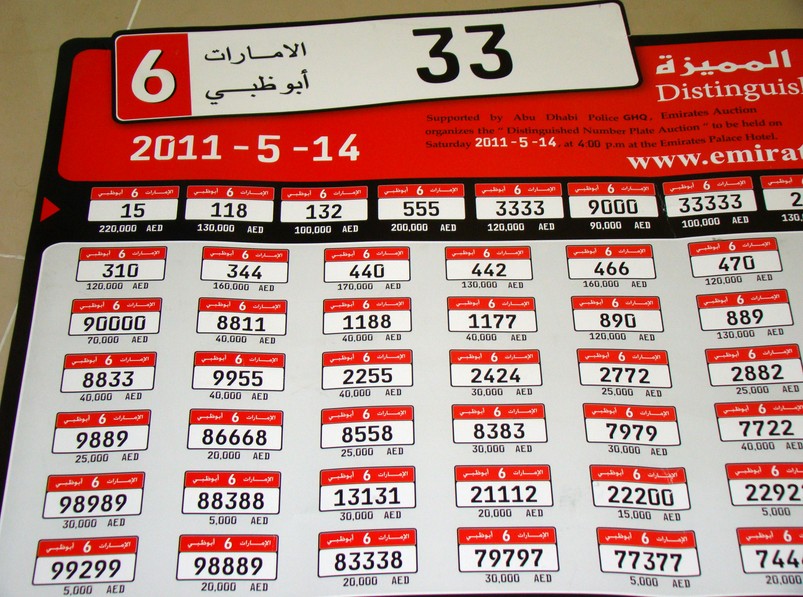 Photographie prise à Abu Dhabi aux Emirats Arabes Unis.
Emirates Auctions is the internationally-recognized auctioneer of the Top Ten most expensive license plates in the world, including the Guinness record-breaking world's most expensive Plate “1” which sold for $14 million in Abu Dhabi in Feb. 2008. The leading auction house in the Middle East, it was established in 2005 by a group of young Emirati business leaders. Emirates Auctions is the official auctioneer for distinguished number plates for various government authorities in the Gulf region. The pioneering auctioneer is working to structure a thriving primary and secondary number plate market in the UAE and entire Gulf Region. Emirates Auctions also specializes in running car and real estate auctions for the industrial and government sectors. It is a member of the National Auctioneers Association, the world's largest professional association focused solely on the auctioneering profession. Abu Dhabi Police Department has partnered with Emirates Auctions to provide an easy method of auctioning prime and desirable licence plate numbers to the general public. Abu Dhabi Islamic Bank provides Emirates Auctions with a secure online banking infrastructure which enables simple, safe and secure online transactions to successful bidders. Emirates Palace is a stunning seven-star hotel located in the city of Abu Dhabi, and is the perfect location for Emirates Auction to conduct their prestigious licence plate auctions. Auctions are usually held in the lavish auditorium, and offer excellent amenities for all auction attendees.

The third most expensive license plate in the world has been sold in Abu Dhabi, cementing the United Arab Emirates as a vanity-plate record holder. The license bearing solely the digit "7" was sold for 17 million dirhams ($4.6 million) in a government auction. In all, 72 specialized plates were sold in the auction for a total of 50 million dirhams ($13 million). According to the Guinness Book of Records, the most expensive plate with the digit 1 was sold to Emirati businessman Said Khouri in 2008 for 52.2 million dirhams ($14.2 million). The second most expensive plate "5" was also sold in Abu Dhabi for 25.2 million dirhams, ($6.86 million) during a special number-plate auction organized by the Emirates Auction Company in 2007. “I think it's a matter of recognition,” said Muhammad Kashif, owner of the UAE Number Plates Company. “Just having a Ferrari isn't much these days. People want a nice number to go with the car. It makes them just that much more popular than the other Ferrari drivers.” Kashif said the trend for personalized and distinctive number plates is so popular in the Emirates those with a flare for the fanciful and a few dollars to spare will settle for something unique, if a little less glamorous. As number plates in the UAE come by default with five digits, the fewer digits on the plate, the higher the price. A number plate with four digits can cost around 5,000 dirhams, ($1,300) but prices are pushed up for numbers that are memorable, in sequence (4567) or all identical (4444).

Abu Dhabi: A young businessman paid Dh2.61 million for car number plate '11111' in an auction conducted by Abu Dhabi Police and Emirates Auction at Emirates Palace Hotel. Emirati Salem Buharoon, 33, who owns Golden Class Rent a Car in Abu Dhabi won the sought after number after fierce competition among three bidders. One of the competitors who backed out at the last stage told Gulf News the price was high for such a five digit number. Salem told Gulf News he wanted the number desperately for his Ferrari, so was ready to pay a big amount. Other special numbers 40000 and 3000 were sold for Dh505,000 and Dh350,000 respectively. Ayoub Mohammad Noor, 35, an Iranian businessman who purchased the number 40000, said he wanted it because he holds the same number in Dubai. Mohammad Khalifa Al Mazroui, an Abu Dhabi-based businessman who bought the number 3000, told Gulf News it is for his personal use. "I bought number 129 for Dh400,000 which I will gift to my father," said Al Mazroui. About 100 multiple digit numbers went under the hammer on Sunday. Number 191 fetched the second highest amount of Dh610,000 after number 11111. About 180 people participated in the fifth auction for 100 multiple digit numbers which fetched Dh20,010,000, a senior official told Gulf News. The five auctions generated more than Dh200 million and the entire money will go to charity projects, said Lieutenant Colonel Abdul Rahman M. Ali Al Kamali, Director of Administration of Privatisation and Financial Investments at the Ministry of Interior.