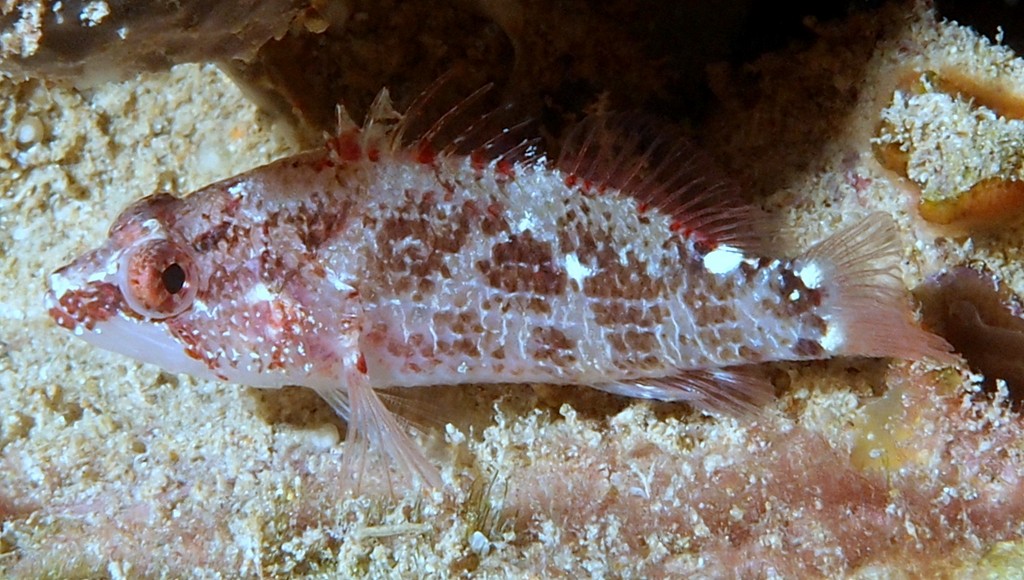 Color
Fresh colour of 23 mm SL fish from the Comoros: body pale, with longitudinal series of brown zigzag stripes; a square black spot at base of upper and lower 6 caudal fin rays, followed posteriorly by a golden yellow spot above and below a smaller black spot on upper and lower middle caudal rays; a black spot on each side of a white spot at base of anal fin rays; proximal part of dorsal fins reddish brown; dorsal-fin spines 4 to 7 with red tips; a dark brown square blotch at base of last 6 dorsal-fin rays; several small, irregular white spots randomly scattered over head and body; ventral part of abdomen and head white; snout and front of lower jaw reddish brown.

Etymology
Plectranthias: from Greek, plektron = anyhting to strike with, spur + from Greek, anthias = a name of an unknow fish given by Aristotle in "History of Animals". This book, written in the fourth century BC, is one of the major texts on biology by the ancient Greek philosopher Aristotle (384–322 BC), who had studied at Plato's Academy in Athens.
longimanus: from Latin, longus ‎= long +‎ from Latin, manus = hand.
Original description: Pteranthias longimanus Weber, 1913 - Type locality: Paternoster Island, East Indies, Siboga station 315, depth 36 meters.

Biology
A cryptic, shallow-water species. Females mature at about 19 mm SL, males at about 23 mm SL. Secretive amongst small boulders or bommies on coastal sand slopes with rich invertebrate and algae growth. Solitary in crevices. Common in scuba-rotenone collections on coral reefs.
As noted by Chen & Shao (2002), most species are too small for capture by hook and line, live in rocky habitats (and are not easily trawled), occur below scuba-diving depths, and are not commercially important. Therefore, the group remains poorly represented in museum collections and many of the species are known from only one or two sites, frequently on the basis of a single specimen.