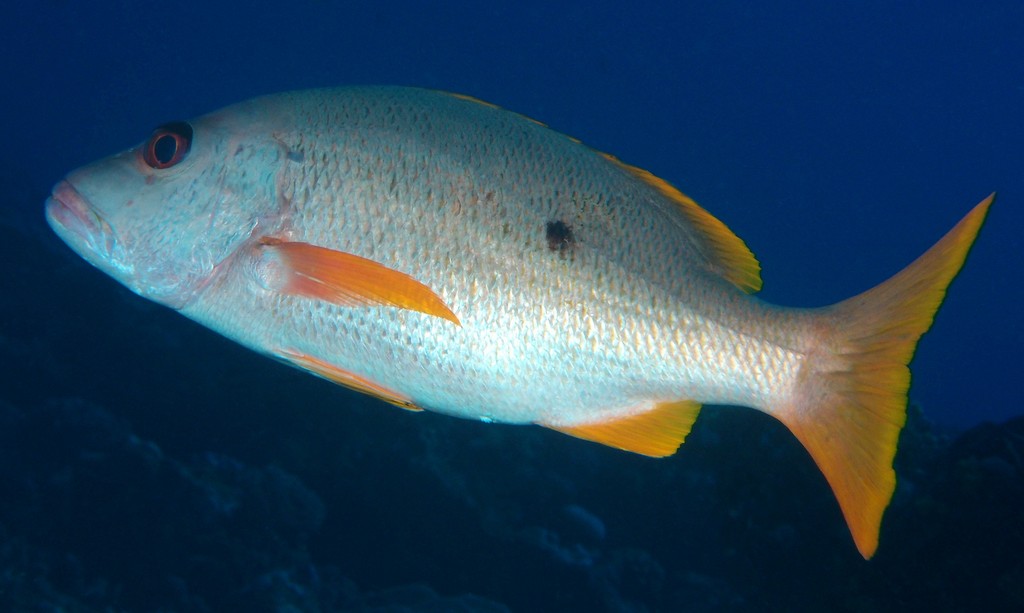 Colour
Generally yellowish to pinkish with dusky scale margins; grey or brown on upper back and dorsal portion of head; a black spot, sometimes faint or absent, on back below anterior soft dorsal-fin rays; fins yellowish.

Similar species
Lutjanus indicus (Allen, White & Erdmann, 2013) - Reported from Thailand, Myanmar, Andaman Islands, Sri Lanka, India, Gulf of Oman and Arabian Gulf. It differs most notably from Lutjanus russellii in possessing a series of seven narrow, yellow-to-brown stripes on the side, obliquely rising (except lower two) dorsally and posteriorly.
Lutjanus johnii (Bloch, 1792) - Reported from New Caledonia. Scale rows on back parallel to lateral line. Center of each scale often with a reddish-brown spot, giving an overall appearance of series of horizontal lines on side of body. A large black blotch mainly above the lateral line below the anterior dorsal-fin rays.
Lutjanus russellii (Bleeker, 1849) - Reported from New Caledonia. Generally whitish or pink with silvery sheen, frequently brownish on the upper part of the head and back. A black spot which is sometimes faint, is on the lateral line below the anterior portions of the soft dorsal fin.