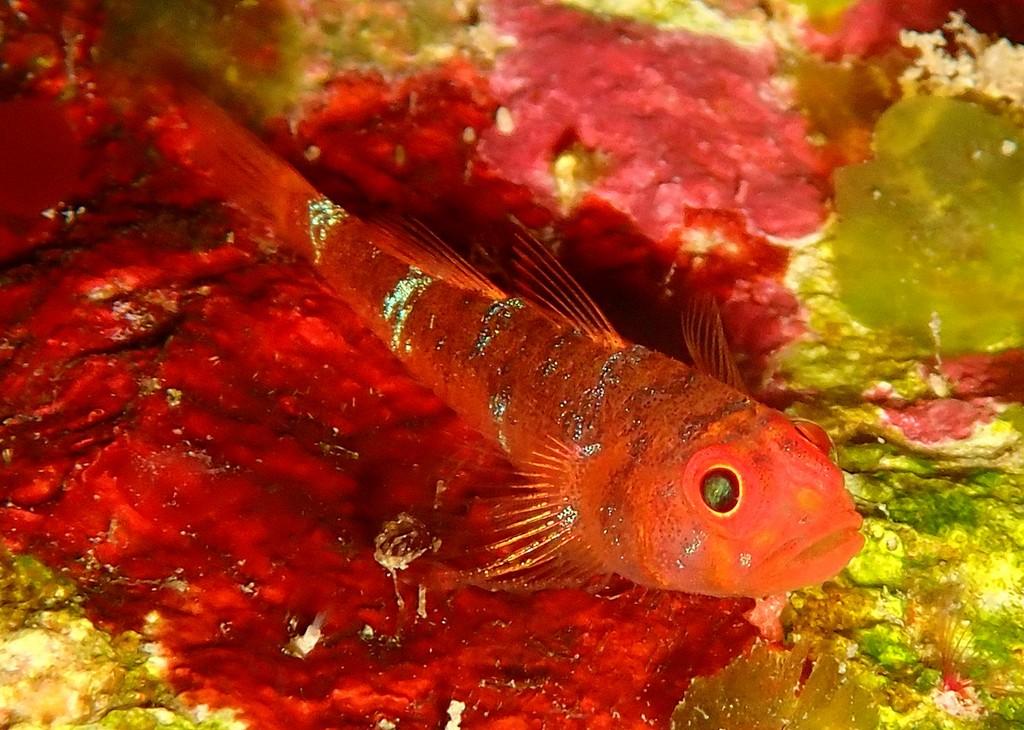 Color
Red, with eight blue vertical bars dorsally, the first under middle of eye, very short; The second a saddle from top of head past rear margin of eyes ending at lower margin of cheeks; The third a short saddle midway from eyes to origin of first dorsal ending at upper edge of opercle; Fourth at origin of spiny dorsal across pectoral base ending at base of lowest ray; Fifth under middle of spiny dorsal; Sixth at origin of second dorsal ending at origin of anal; Seventh near rear of base of soft dorsal, and eighth a round blotch posteriorly on dorsal part of caudal peduncle.
Eviota corneliae (Fricke, 1998) - Maré Island, Loyalty Islands, New Caledonia - is a synonym of Trimmatom eviotops (Schultz, 1943). Color in life: head and body brigh yellow. Head with 3 narrow vertical blackish brown bars, one across the eye, one right behind the eye, and one above the preopercle. Sides of body with 5 thin vertical dark brown trunk bars, the last trunk bar developed as a saddle on the caudal peduncle, the other bars reaching three-fourths across the sides of the body, trunk bars discrete, uniform.

Etymology
Trimmatom: from Greek, trimma, -atos = something crushed + from Latin, atomus = an atom, particle incapable of being divided. Referring to small size of Trimmatom nanus (Winterbottom & Emery, 1981) and Trimmatom offucius (Winterbottom & Emery, 1981).
eviotops: from Greek prefix, ev-, eu-, = good or well, very + from Greek letter, iota = smallest letter in the Greek alphabet and often figuratively used to describe anything small or insignificant. Referring to Eviota epiphanes (Jenkins, 1903), which, at 1.0-1.9 cm in length, Jenkins claimed was the “smallest vertebrate that has up to this time been described”. + from Latin, -ops = appearance. Referring to its similarity to Eviota.
Original description: Trimma eviotops Schultz, 1943 - Type locality: Reef of Rose Island, American Samoa, collected by Leonard P. Schultz, June 11-14, 1939 along with five paratypes.

Biology
Inhabits lagoons and on the 'reef top'.