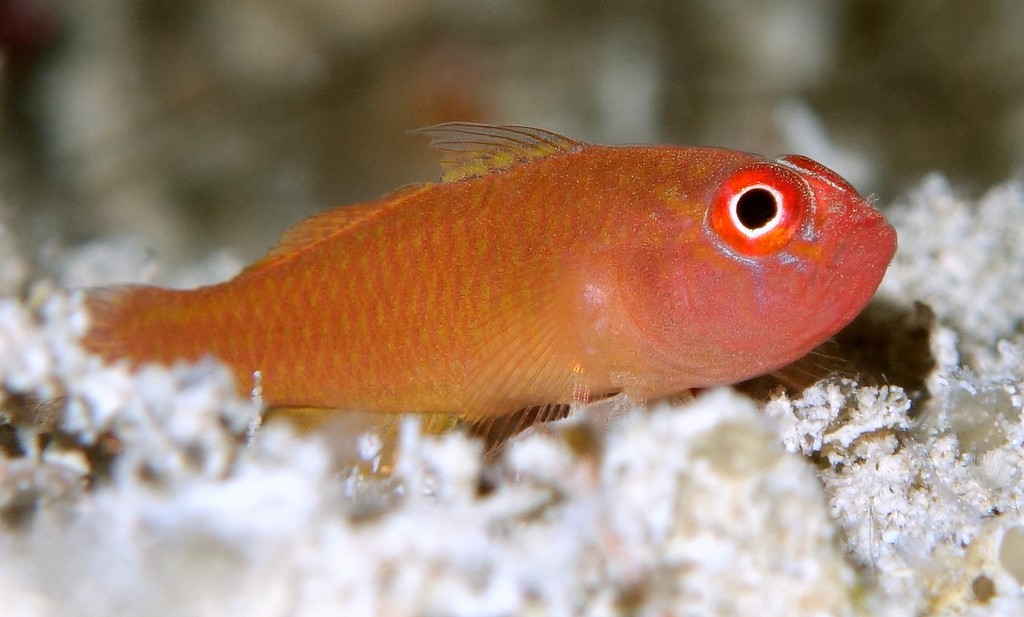 Description
Dorsal spines (total): 7; Dorsal soft rays (total): 9-10; Anal spines: 1; Anal soft rays: 8-10; Pectoral fin rays (total): 17-21, branched pectoral rays: 7-11. A species of Trimma with a deep concave, ‘U’-shaped interorbital trench; Bony interorbital about half pupil-diameter in width; A slight groove posterodorsal to the eye; Predorsal midline naked, sides of nape covered with small scales to or near to the eyes; Cheek and operculum naked; Pectoral-fin base with oval, moderatesized scales; Prepelvic area with 5–6 rows of cycloid scales, isthmus naked anteriorly, one slightly enlarged scale on the membrane between the bases of the pelvic fins; Central 6–13 pectoral rays branched, uppermost and lowermost rays unbranched; Fifth pelvic-fin ray branched once dichotomously and about 60–75% length of the fourth; Other rays usually with one sequential branch, basal membrane connecting the two pelvic fins only at the base; Second dorsal spine longest, usually filamentous, reaching at most to midway along the base of the second dorsal fin in Australian material; Nape crest fleshy from the first dorsal origin to above the operculum; Head and body red in life, yellow in preserved material, head with a thin vertical grey (bluish grey in life) bar from the anteroventral margin of the eye to the middle of the jaws and a second bar extending more-or-less vertically downward onto cheek from about the middle of the eye (often persisting in preserved material as faint grey bars); Orbit rimmed with a thin band of melanophores, more prominent dorsally (faded in preserved material). Max length: 3.0 cm SL. Depth range: 4 - 90 m, usually: 4 - 35 m.

Variation
Branching of pectoral rays increases significantly with size (p = 0.01, based on 70 specimens selected at random from 15–25.5 mm SL). Specimens below 20 mm SL usually have 5–7 branched rays, while specimens above 20 mm SL usually have 8–11 branched rays. The ranges of counts are, however, highly variable at all sizes.
There is considerable variation in the length of the second filamentous dorsal spine. In most Australian material the spine is typically short, rarely reaching beyond the middle of the second dorsal fin when adpressed. In specimens from the Philippines, the spine often reaches beyond the end of the second dorsal fin.
Pectoral ray counts show significant variation between samples. Samples from Fiji average higher pectoral ray counts (19.0) than other localities. Analysis of Variance on samples of >20 specimens indicate that the samples are not from a single population (p <0.05). Samples from the Great Barrier Reef show little variation, with means between 18.4 and 18.6.