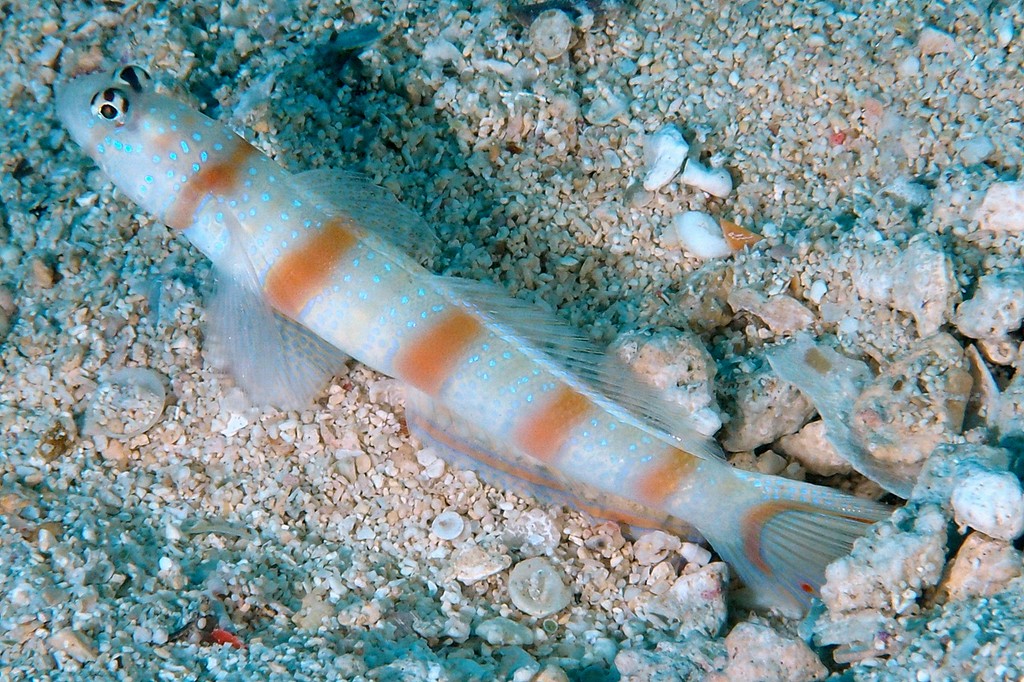 Description
Body and head elongate and compressed. Eyes high up above dorsal profile. Mouth oblique. The maxilla extends to below mid eye. Conical teeth in several rows, on both jaws. The teeth in the inner and outer rows on both jaws are enlarged. A pair of large canines in inner row of lower jaw, and a pair of curved canines in outer row of upper jaw. Tongue truncate. Gill opening wide, reaches to below eye. Posterior nostril, a pore, close to eye. Anterior nostril, in a tube, about alfway from eye to upper lip.
The eight of dorsal fins is more or less equal to body depth. The pectoral fin reaches to below the insertion of the second dorsal fin. The pelvic fins reach the anus. A delicate membrane unites 2/3 of the inner rays of both fins. No fraenum.
Cycloid scales on anterior part of body (approximately anterior to a vertical line from the insertion of the second dorsal fin). The scales posterior to this line are ctenoid. Thorax scaled. No scales on the bases of the pectoral fins, on predorsal region and on the head.
Max. length: 9.5 cm TL. Depth range: 3 - 20 m.

Etymology
Amblyeleotris: from Greek, amblys or amblus = dull (blade: not sharp), blunt, obtuse + the Greek name of a fish, eleōtris, found in the swampy waters of the Nile (Egypt); from the Greek, eleios = who lives in the marshes. The name Eleotris appears for the first time in Déipnosophistes, a compilation of anecdotes and quotations from ancient authors, written by a scholar and grammarian Greek, Athenaeus of Naucratis (about 170-223 AD). In 1763, the Dutch naturalist and collector Laurentius Theodorus Gronovius (1730-1777) used this name to designate a new genus of fish. The authorship of the genre escapes him because his work was rejected by the scientific community of the time. The genre should have returned to the doctor, entomologist and naturalist of Italian culture, Giovanni Antonio Scopoli (1723-1788) but the late recognition of his work made him lose the authorship of the name. Today the genus, Eleotris, is attributed to Bloch & Schneider, 1801.
novaecaledoniae: from the island New Caledonia. A special collectivity of France located in the southwest Pacific Ocean.
Original name: Amblyeleotris novaecaledoniae Goren, 1981 - Locality type: Northern coast of Maitre Island, New Caledonia.