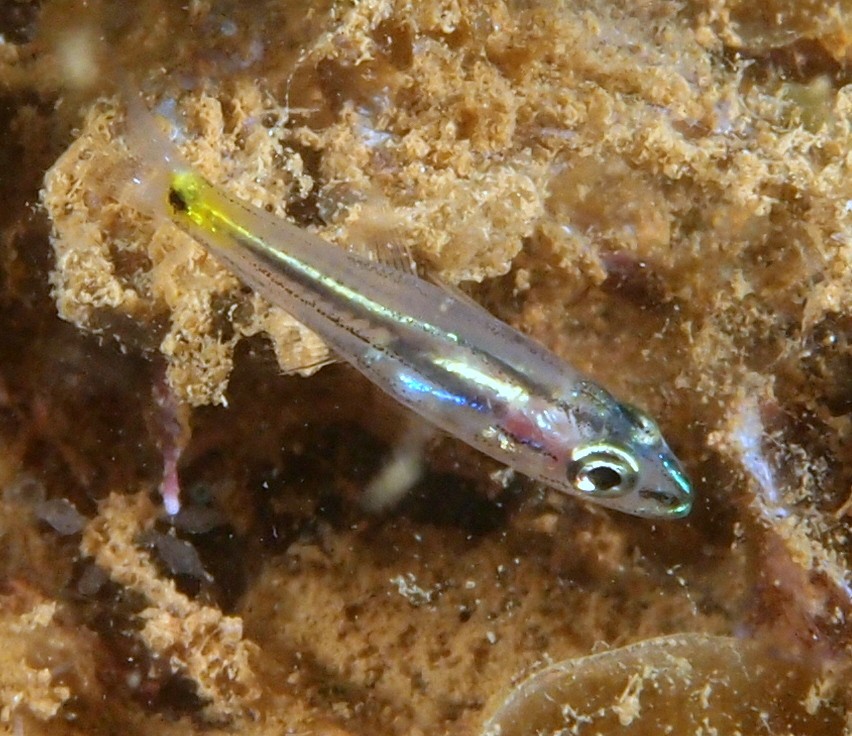 Color in alcohol
Very light brown with five longitudinal dark brown lines on the head and body, the pale interspaces between the stripes being two to three times as broad as the stripes themselves; a round black spot centered on lateral line at base of caudal fin, this spot surrounded by an unpigmented area (yellow in life). The first body stripe lies in mid-dorsal line, beginning in the inter-orbital space and bifurcating to surround base of the two dorsal fins; the second stripe runs from snout through top of eye, ending at edge of pale area on caudal peduncle; the third stripe runs down middle of body from snout to caudal peduncle; the fourth extends from the chin through lower edge of eye to caudal peduncle; the fifth stripe is double on chin, triple in pelvic region, double around anal fin, and a single mid-ventral line on caudal peduncle.

Biology
Inhabits reef flats and lagoon and seaward reefs to a depth of 40 m or more. Occurs singly or in small to large aggregations, taking shelter in dark crevices, branched coral, under ledges, and among the spines of Diadema setosum (Leske, 1778). Nocturnal species. Feeds on small crustaceans and gastropods, also on small fishes. Generally common. Has been reared in captivity.

Similar species
Cheilodipterus isostigmus (Schultz, 1940) is distinguished externally from Cheilodipterus quinquelineatus by the position of the basicaudal spot which is in line with the mid-lateral stripe, and internally by having canine teeth at the end of the lower jaw. Distribution : Western Pacific: patchy distribution, known in the South China Sea, the Philippines, Borneo, New Guinea, Papua New Guinea, Solomon Islands, Marshall Islands. Also in Moluccas, Belau, and Caroline. Reported from New caledonia. Biology : Occurs in lagoon reefs to depths of at least 12 m. Usually in small groups among staghorn corals. Often collected with Cheilodipterus quinquelineatus, but tends to prefer deeper areas. Feeds on small fishes. Depth range 4 - 40 m. Max length : 11.0 cm.
Color as in Cheilodipterus quinquelineatus, except the stripes on the chin and abdomen, which are less distinct.
Cheilodipterus isostigmus (Schultz, 1940) is very difficult to distinguish from Cheilodipterus quinquelineatus without examination of the teeth at the tip of the lower jaw where the presence of one or two canines in isostigmus affords a consistent means of separation. Since both species possess canines, I do not believe that their presence or absence in one place in the jaws constitutes a generic difference as indicated by Schultz (1940).